I found this trash article by Wm Conde on hemp. He is off by a factor of 8. I have seen this statement repeated endlessly on the web so I decided to track down the source.

I found the original research on the JSTOR database that prohibits my copying it, but I captured a page scan as “Ditchweed 1.jpg”. They measured the seed count and weight. The average count times the average weight works out to 600 pounds per acre. It also says half of it won’t germinate (they tested germination too) so 300# is the actual average.

But if you take the maximum count times the maximum weight you get 7945 pounds which he has rounded up to 8,000 pounds. And SuperSeed all germinates. The rest of his math fails too. But he doesn’t get the article name right or the study location right. This leads me to believe that he has never seen the article and copied the 8,000# number from someone else. I got suspicious again.

The article referenced their sidekicks who went along on the study and measured the THC content. This was reported in a separate magazine. (Odd, why? Usually a 2-part study is published in the same journal. It leaves the impression that somebody wanted these studies to appear to be independent.) Again I find it on JSTOR and take a screen copy as Ditchweed 2.jpg. Here they say that the average THC content of 101 samples was 0.34% THC. Almost hemp! The extreme example was 2.24%.

The studies took place in the summer of ‘69 when everybody else was in Woodstock smoking more than 2.24% THC. The reports don’t say who, but university research has to be funded by somebody and the federal government is usually the source. So the research would have been commissioned by the newly appointed Nixon administration. The State of Illinois certainly wouldn’t care, the liquor industry was too busy selling Bartles and James and the Marlboro Man still had both lungs.

They sampled plants in a quarter square meter circle. That works out to 22.2” diameter. Hard to extrapolate to an acre. No good scientist would. The researchers all used square meters as their areal unit. They never discussed acres.

The THC report is finally published in 1973 using our government’s favorite spelling of “Marihuana”. The seedcount study is received in 1973 but it doesn’t get published until January, 1975. It refers to ditchweed as “Naturalized Hemp” so they were fully aware it was hemp. I believe the 0.3% limit on THC was in the Controlled Substance Act by this time. Europe wanted it in the International drug treaties so the US had to sign up to it. THC was only published in 1964 (discovered in 1962), but by 1969, our government wants a THC study of ditchweed. (After 40 years, they’re not sure of global warming)

Now, what government agency would want to lie about about the reproductive capacity of ditchweed? Hint: the DEA’s website says their ditchweed program initiated in 1979. They have also said the ditchweed is left over from Hemp for Victory in WWII. That statement is also made in these reports and I suspect originates with these authors. This means the DEA has certainly been studying them. In fact, they are the only ditchweed studies extant and you need a study to get a Congressional appropriation. Very likely, the source of the 8,000#/acre figure is the DEA.

There would also be something said to a Congressional committee to get the appropriation. I would like to search the Federal Register between 1975 and 1979 to find what they said. In essence, the DEA’s own study showed there was never much more than hemp in the ditches. They were always fudging the numbers and they probably lied to Congress to get their program in the first place.

Well, that’s my conspiracy theory for the day.

What you need to know about the new hemp law in Florida.

What you need to know about the new hemp law in Florida. 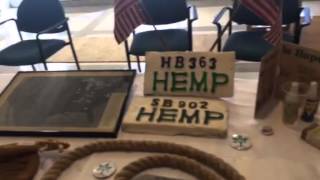 Hemp Day at the Capitol